– In the pictures, she created a confident alte-look of the formal dressing code of the national service

– People have reacted differently to the photos, with some commending her for how beautiful she is

A man with the Facebook name Atasie Wisdom got people talking when he shared the photos of a lady in a customized (National Youth Service Corps) NYSC uniform.

According to WinNaijaTV, the pictures got so many reactions on the private Facebook group, Igbo Rant, the man posted it on.

The man captioned the post with “NYSC promises to deal with any corp member who abuses the NYSC uniform right or wrong?”.

In one of the pictures, the unidentified lady could be seen wearing an NYSC shirt tucked into a military cameo trousers. In another, she wore a green facemask with a jacket of the same colour over the shirt.

A green cap she has on is a total departure from the ash face cap that the service gives members. While it may seem like a fashion statement, it is not the standard dressing of the paramilitary institution.

A Facebook user, Chindindu, said: “They should calm down please. This babe fine oo, see fitting”

Emma Lex II said: “She is abusing the uniform”

Ifeoma said: “Dey should make it a little bit se*xy”

Fashion statements like this could could be seen as people trying to do something new to make the uniform suit their different personalities. 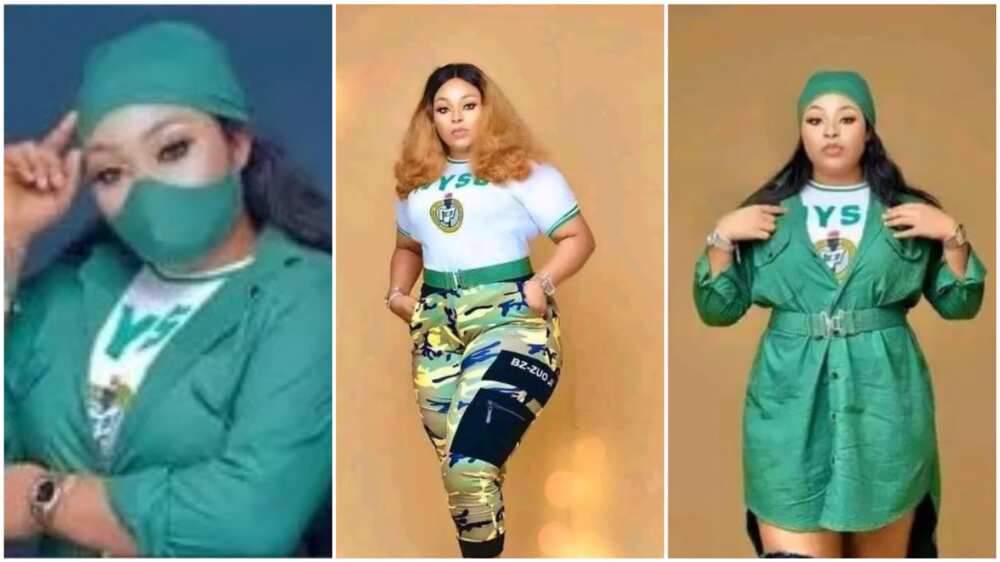 A collage of the lady in the uniform. Photo source: Facebook/Igbo Rant
Source: UGC

Meanwhile, Legit.ng earlier reported that a group named Serve With Skirts Movement demanded the inclusion of skirts as part of the uniform for Nigerian graduates participating in NYSC.

Members of the group staged a protest in Abuja on Wednesday, January 15, to drive home their demand.

The group said not allowing female corps members to wear skirts is a breach of their rights as guaranteed by the Nigerian constitution.

She claimed that female corps members in the 1970s and 1980s used to wear skirts and urged the government to readopt it.