During the week, the Nigerian Navy Ship DELTA patrol teams conducted anti-crude oil theft/anti-illegal bunkering operations in its area of operation during the week. 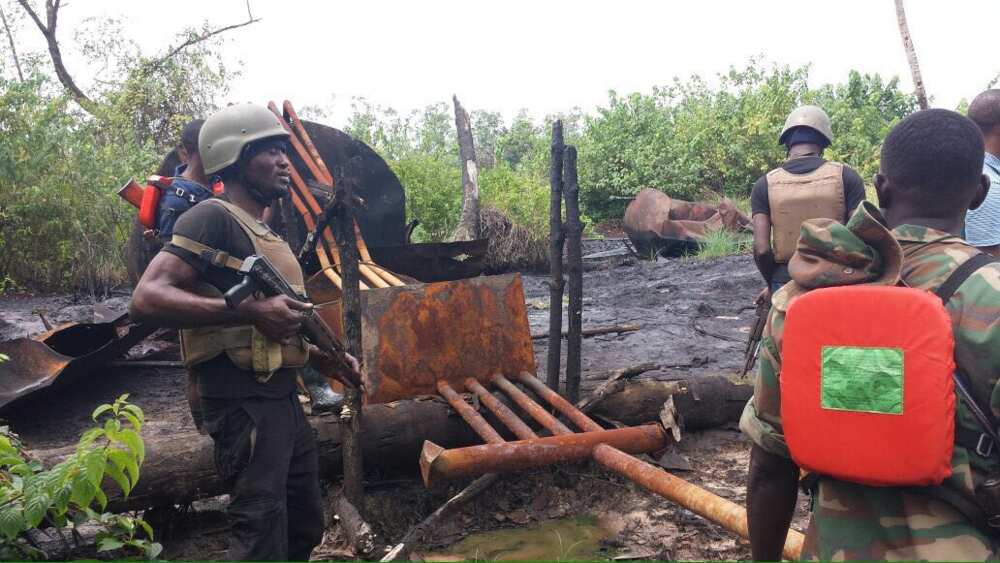 The Nigerian Navy has continued its clearance operations in the Niger Delta
Source: Facebook

“The site had 30 ovens, 40 receivers and 16 dugout pits cumulatively laden with about 120,000 litres of product suspected to be stolen crude oil and 40,000 litres of suspected illegally refined AGO.

“On the same day, the team discovered another illegal refining site at around Opumami general area.

“The site had 2 ovens, one receiver, 8 x 250 litres metal drums and one dugout pit cumulatively laden with about 30,000 litres of suspected stolen crude oil and 25,000 litres of product suspected to be illegally refined AGO,” part of the statement read.

The statement noted that no arrest was made during the operations as the miscreants fled on sighting the patrol team.

The statement further revealed that due process is being followed to clear the site.

The arrest was effected at about 5 nautical miles off the Escravos breakwaters.

Upon interrogation, the Captain of the vessel affirmed that the AIS of the vessel was not operational as at the time of her arrest due to a fault it developed while at sea.

The military says Hajiya Binta has been handed over to officials of the Nigerian Maritime Administration and Safety Agency.

Those who circulated the videos had suggested that the civilians were being punished for violating the presidential directive to stay at home over the coronavirus pandemic.

The DHQ in a statement sent to journalists and signed by the coordinator, Defence Media Operations, Major-General John Enenche, said the move is a calculated attempt to blackmail the military.