A Nigerian man has left his girlfriend in shock by sending a parcel of ring and a romantic note requesting her hand in marriage.

Legit.ng notes that the lady in question with the Twitter handle @zeecardy took to the microblogging site to share the good news.

The young man noted that distance was a huge barrier for him, urging @zeecardy to accept and wear the ring, adding that he would still propose to her in person.

His romantic note read in part: “Dear wifey, since distance and you not being ready is a huge barrier right now, I can’t do this in person but this is me saying I want to spend the rest of my life with you. I’d still do this in person at the right time, but please accept and wear this ring for now till then.

“Let the whole world know you’re mine. This is the beginning of many years together and even in the afterlife” 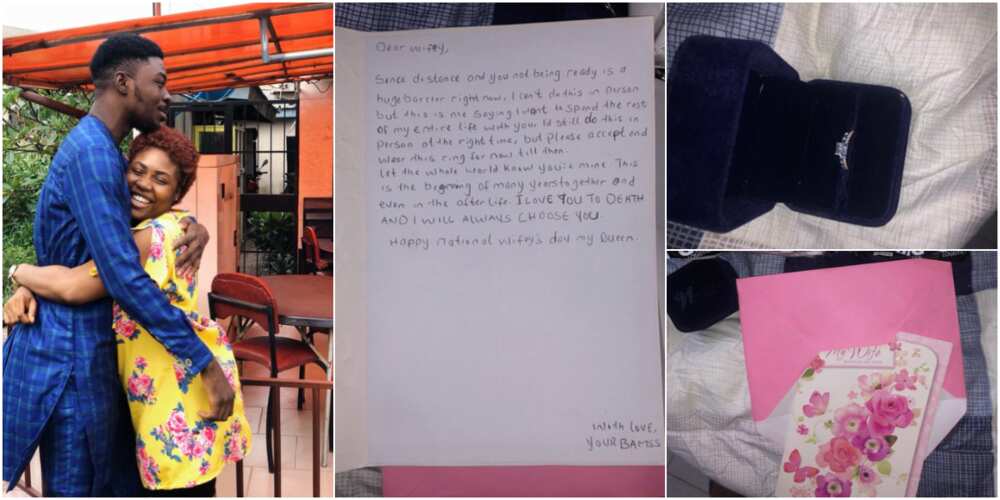 The young man says he had to device a means to ask for her hand in marriage since distance was a barrier for him. Photo credit: @zeecardy/Twitter
Source: Twitter

Sharing the good news on her page, @zeecardy wrote: “I’m lost for words, National girlfriend’s day became National wifey’s day for me . Omg I love this man so much.”

In other news, a courageous young woman has shocked social media after proposing marriage to the love of her life in public in a video that went viral.

Maya Jama and Stormzy split as fans are left confused

In the video, the lady actually went on her knee as a man would normally do to a lady.

It was reported that the two have been long time lovers but were yet to take their relationship to the next level by tying the knot.

The proposal appeared to have taken place in a large restaurant filled with different groups of friends and families who had gone to eat.

Must a woman adopt her husband’s name after marriage? | Legit TV