– When she opened her mouth, the sweetest sound came out and people watched in amazement The honey-voiced girl had the jitters at some point. Photo: Faith Sudi/Instagram
Source: UGC

A sweet angel from Kenya had people singing along to the words of that song after gathering enough courage and stepping in front of a crowd during a church event.

Dressed in a pink Cinderella-like dress coupled with a flash of innocence drawn all over her face, the unnamed little princess knocked people off their feet with her melodious voice.

The tot who had attended a ceremony hosted by Jubilee Christian Church set her fears aside as she stood at the stage with a microphone clenched in her hands. In a Twitter video posted and deleted by digital journalist Faith Sudi, the angel was seen staring at her audience straight in the eyes as her song played in the background.

She then started singing the rendition of Praise The Lord Oh My Soul.

And every lyric that came out of her mouth touched the souls of the people present. It was like listening to the inviting chirps of birds in the morning or a seasoned singer.

The audience seated under a tent was taken by how amazing the girl’s talent was and they smiled as she kept singing.

A man from the background stepped to the podium to help the little lady hold her mic close to her mouth when a sense of fear kicked in. 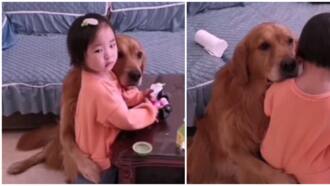 Best friend goals: Dog gets protective over little girl as mother scolds her

But all in all, the performance deserved an A for effort and an A plus for character.

In other news, a 14-year-old boy has become popular online after his brother with the handle @Kingflacko3 shared the amazing dishes the teenager cooked.

Cooking is a great art and going by the photos of the amazing food the teen cooked, he is indeed a master of his craft. Some rice and meat could be spotted on the table. Also, a well-prepared and carved watermelon sat in between dishes in its red glory.

Why gospel music is thriving in a secular world | Legit TV