– A beautiful lady, Amanda Chenai, took to social media to share the most special moment with internet users

– She posted photos of the proposal on her Twitter page and it went viral, leaving a lot of tweeps a bit jealous

On Wednesday, July 29, a beautiful woman identified as Amanda Chenai, took to social media to share with tweeps one of the most special moments of her life.

Chenai revealed her boyfriend whom she described as her best friend, surprised her with a romantic proposal. To make the moment even more special, all their closest friends and family were present to witness the moment.

The newly-engaged beauty posted several images of the proposal on her Twitter page and she captioned the photos: “I still cannot put this moment into words. The greatest surprise of all time. In front of some of our closest friends and family, my best friend asked me to be his wife. God really spoilt me with the best.” 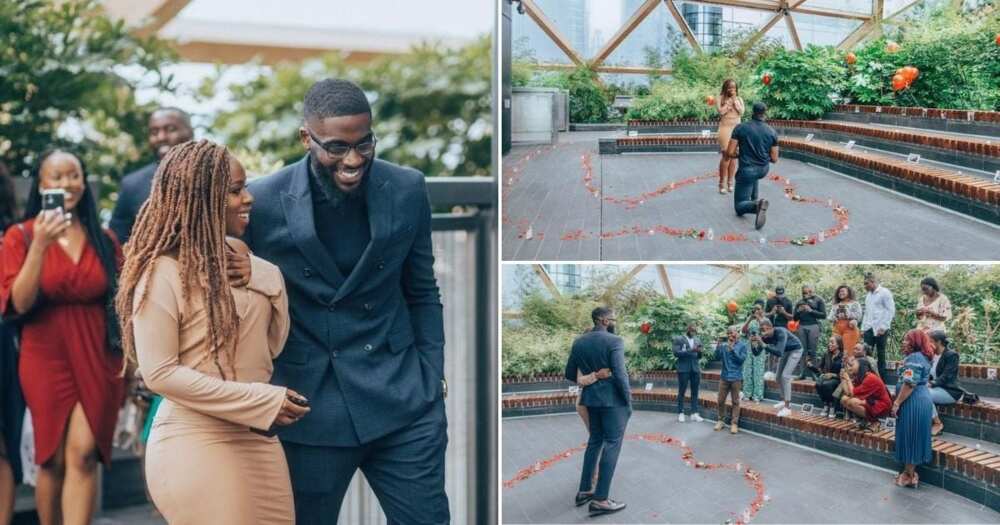 Amanda Chenai and her boyfriend recently got engaged and their engagement photos wowed the internet. Photo: @chenaixo.
Source: UGC

In another post, Chenai showed off the massive engagement ring her partner proposed with.

“Staring at my new fave piece of jewellery.”

Her posts went viral, gathering thousands of reactions from people across the world. However, their love left some tweeps feeling a bit jealous and they wanted to know when it would happen for them.

“God I see what you are doing for others.”

“Congratulations!!!! Does your best friend have a brother that I can best friend?”

love is no doubt a beautiful thing and finding that special someone is something many people hope and pray for. While some are yet to find theirs, there are others who have and one of them is George Bannerman.

The Ghanaian man left many social media users pleasantly surprised when he revealed he was set to marry his bae after 13 years of dating.

Bannerman who is a Master of Ceremony shared before and after photos with his sweetheart and internet users can’t get over their amazing transformation together.

Can a man show his love to a woman without having money? | Legit TV