The Edo Modular Refinery, a key legacy project by the Governor Godwin Obaseki-led administration to recalibrate the state’s industrial base is almost complete.

The refinery with a capacity for 5,500 barrels per day was birthed through a Memorandum of Understanding (MoU). 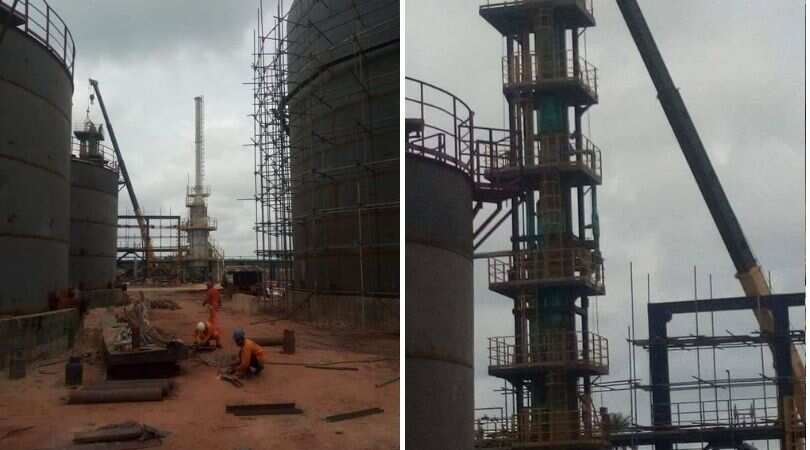 The crude is to be sourced from the Nigerian Petroleum Development Company’s (NPDC) facility – oil mining lease (OML) 111, near the state capital, Benin city.

Special Adviser to the Edo state governor on media and communication strategy, Mr Crusoe Osagie, said the modular refinery project is among the growing list of ongoing legacy projects by the Obaseki administration.

Others are the 55MW CCTEC Ossiomo Power Plant, which has been completed and ready for use; the Benin Enterprise and Industrial Park, which development is ongoing and the Benin River Port, for which preliminary works are ongoing.

He noted that the governor is committed to resetting the economy of the state for prosperity and industrial growth.

His words: “The local content component of the refinery project ensures that Edo citizens are trained in welding, refinery operation and fabrication works to enable them to participate in the construction of the refinery as well as its operation, post-commissioning.

“The refinery is at 70 per cent completion and we are very sure that it will soon be ready for commissioning.”

He added that the actualisation of the project is premised on the governor’s smart thinking and financial savviness through which he mobilized funds and resources to initiate and execute the project.

Obaseki is reputed to have done well in almost four years as Edo state governor.

He pioneered a state-backed health insurance scheme to provide a robust sector that will attract private investors.

He has also rehabilitated more than 60 roads across the state, restructured the Universal Basic Education Board and the Geographical Image System (GIS) capturing of land and houses in the state to ease issuance of Certificate of Occupancy (C of O) among others.

The governor is the recipient of the Nigerian Union of Teachers (NUT) award for best performing governor of the year in October 2019.

Since assuming duty, Obaseki has enacted projects with the aim of making the state an investment hub. Such projects include:

Meanwhile, Governor Obaseki has urged residents of Edo to observe set guidelines to prevent the spread of coronavirus amid electioneering campaigns as the death toll for the virus in the state hits 82.

Speaking to journalists in Benin city, the governor called for caution among citizens as the campaigns enter a critical stage in the coming weeks.