– Brooklyn promised to love Nicola every day and in every way

Legendary football player David Beckham’s son Brooklyn is no longer a young boy. He is finally off the market.

The 21-year-old Instagram celebrity announced that he and his 25-year-old lover Nicola Peltz were officially engaged. 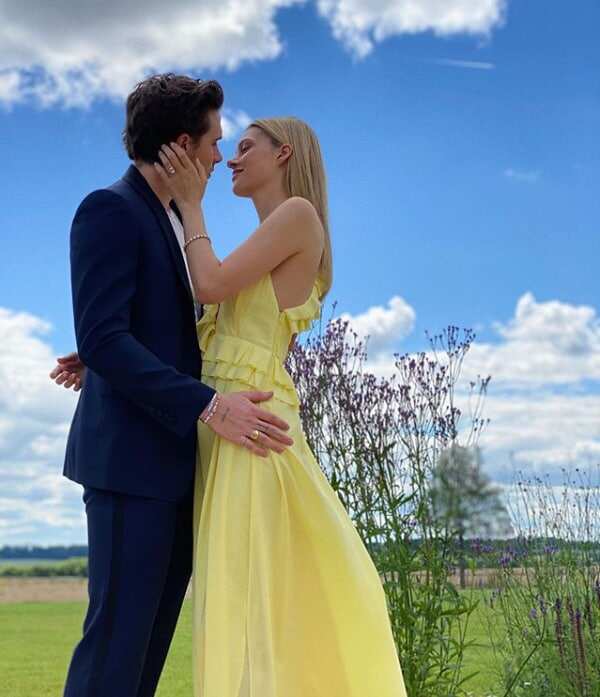 The pair shared the good news via social media and their new step broke the internet as guys from all over the world rushed in to congratulate the happy couple.

Nicola was given a huge, expensive, and sparkly diamond rock that sat pretty on her engagement finger as she posed for a photo with her fiancé Brooklyn.

Brooklyn’s mum and designer Victoria Beckham was elated and revealed on her Instagram page that the whole family wished the pair an eternity of love and happiness.

“The most exciting news!! We could not be happier that Brooklyn and Nicola are getting married! Wishing you so much love and a lifetime of happiness. We all love you both so much,” the mum wrote.

To pay tribute to her future mother-in-law, Brooklyn’s bride to be posed in a dress from Victoria’s collection.

The yellow ruffled dress which was being sold for N354,632 looked gorgeous on Nicola and brought out her radiance.

The lovely lady made summer look like a dream and glowed on the photo as she made her fiance’s mother the proudest woman in the world.

Brooklyn and Nicola dated for nine months before the handsome tuck popped the question.

The two made their relationship public in 2019 with a PDA packed photo posted on social media.

Fascinating details about Catherine Mooty: Her life in detail

David and Victoria blessed their union and severally said they loved Nicola.

Meanwhile, Legit.ng reported that Mary Namatovu had to find a way to let the world know she is getting married, and since the coronavirus pandemic has stopped people from going to church or hold social gatherings.

The soon-to-be-wed bride took to Facebook to let everybody know that she was engaged and whoever had an objection to their union should come out early enough.

Natomovu posted her fiancé’s photo asking all those he may be married to or engaged or those he may have sired children with to come forward before the d-day.

How much should a man have before thinking of marriage? | Legit TV