Veteran singer and rapper Lanre Dabiri popularly known as Eldee the Don has broken a follower’s heart after he said that he does not have money to give anyone.

The coronavirus pandemic has led many countries to mandate their citizens to stay at home. While this is not convenient for many people, health experts say that it is the best way to manage the dreaded virus and to avoid infection.

When the lockdown happened, Nigerian citizens started complaining about hunger and the lack of money. To ease the burdens on people, celebrities, individuals, and some organisations decided to give out money and relief materials.

Some fans and followers also use the opportunity to beg celebrities for help, which may be overwhelming at times.

Recently, a follower identified as @westerchyke decided to try his luck with veteran singer Eldee the Don. @westerchyke took to the popular micro-blogging platform, Twitter, to ask the rapper a question.

The follower asked if there is any giveaway for the boys.

Eldee the Don replied the follower and said that he does not have any money to giveaway.

According to him, “I don’t have a kobo to give anybody.”

In a related story, Legit.ng earlier reported that actress Abiola Adebayo told fans asking for money that she also needed giveaway. The actress who is also a film producer and a TV presenter, in an Instagram post, stated that contrary to what many people think of her, she is in fact, not rich and asked her fans to stop making her feel bad for not being able to help. Adebayo noted that times were hard and urged her fans to stop sending DMs asking for giveaways. The actress who revealed she had lots of responsibilities, admitted that she also needed giveaways. 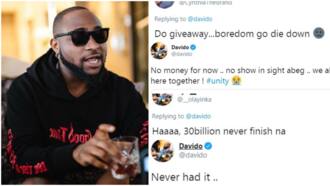 She asked for her fans forgiveness if she had ever given them the impression that she was rich.