Chelsea boss Frank Lampard has expressed displeasure towards the Video Assistant Referee technology after his midfielder Mateo Kovacic was sent off in his side’s 2-1 defeat to Arsenal.

The Gunners came from one goal down to beat their London rivals at Wembley Stadium to their 14th FA Cup title on Saturday, August 1.

It was a moment of joy for Mikel Arteta while Lampard was left in frustration despite Christian Pulisic handing him the lead earlier in the game with a sumptuous goal from a superb build-up.

The 26-year-old’s supposed challenge on Granit Xhaka earned him a second yellow in the game, but a replay showed there’s was hardly a contact between the two players. 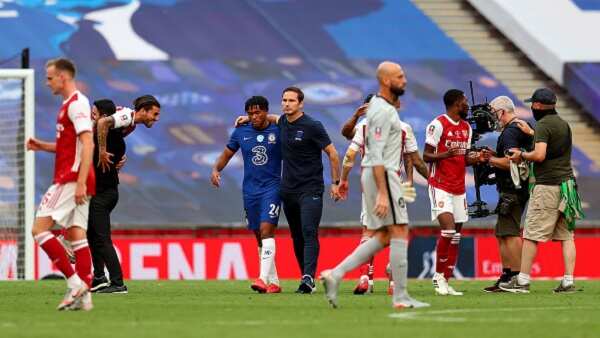 He told beIN Sports: “What kind of rule is that? There’s always been this one that you couldn’t challenge two yellows. Someone’s sitting there really stubbornly sticking to their guns on that one.

“If we have VAR, that’s great, let’s use it as much as we can to get the right decision. That’s nowhere near, it changes the game.

“We pushed them a bit at the end, I can’t fault the lads’ effort for pushing. But it was never a red card. ‘Again, I always try and come back to us and we didn’t do enough to win the final.”

Meanwhile, Pierre-Emerich Aubameyang’s brace were all that Arsenal needed to overturn the scoreline in their favour and crown their season with silverware.

It will also be worthy to note that the Gunners are the record holder of the oldest cup competition in England after winning the 14th FA Cup title at the turn of a new month.

While Chelsea’s woes were compounded with their most exciting player on the field Pulisic being helped out in the 49th minute with Pedro Rodriguez coming on for the American forward.

Mikel Arteta and his wards knew before the game that a win will be a glorious one for them considering their failure to finish among the top four teams.

The Gunners got the first chance to score in this encounter through Aubameyang, but he was caught offside by the referee in the 4th minute.