– According to Ngalale, the benefit of such trips come in the form of a stronger national economy by virtue of the bilateral agreements the president has signed Nigeria into

The senior special assistant to President Muhammadu Buhari on public matters, Ajuri Ngelale, has said that Nigerians are benefitting from the leadership of the president since his assumption of office in 2015.

The News Agency of Nigeria (NAN) reports that Ngalale who described the president as an incorruptible and credible leader said President Buhari’s foreign trips would yield positive results.

He said such results would come in the form of a stronger national economy by virtue of the bilateral agreements the president has signed Nigeria into.

Ngalale said: “I say that because when you look at the deliverable from those trips, you will realise the extent to which those trips have now added value to our nation’s economy.” 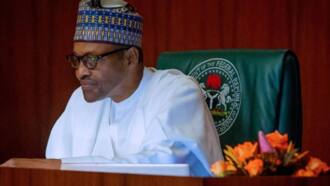 Why Buhari chose to run for 2nd term – Femi Adesina

He the President Muhammadu Buhari’s led administration has prioritised the revival of the Nigerian Iron Ore Mining Company (NIOMCO) in Itapke, Kogi state among many other feats.

According to Ngalale, Nigeria as a country will be getting some physical infrastructure and other apparatus that will help secure the nation’s maritime territory and coastal waters.

“We are going to be building train cars in Nigeria thereby decongesting the ports, and taking the pressure off the roads,” he said.

Meanwhile, Legit.ng previously reported that following President Buhari’s meeting with his Russian colleague, Vladimir Putin, the government of Russia promised to support Nigeria in the construction of a 1,400-kilometre rail track from Lagos to Calabar.

The spokesperson to the president, Garba Shehu, said the development was reached in one of the agreements between President Buhari and Putin.

NAIJ.com (naija.ng) -> Legit.ng We have updated to serve you better.