– Fans who are anxious about the relationship between two housemates, Eric and Lilo, have gone a step ahead of the housemates

Fans of BBNaija housemates Eric and Lilo seem to be enjoying their relationship goals and they have gone ahead to design a wedding invitation card for the two love birds.

In celebrating their relationship in the BBNaija house, a beautifully designed wedding invitation card for the couple is making its round on social media.

Meanwhile, a viewer had claimed that Lilo and Eric would be the first housemates to be evicted from the BBNaija house. According to the fan, this is to afford the love birds enough time to plan for their traditional wedding.

Eric and Lilo are one of the few BBNaija lockdown couples whose ships might survive and be sustained. 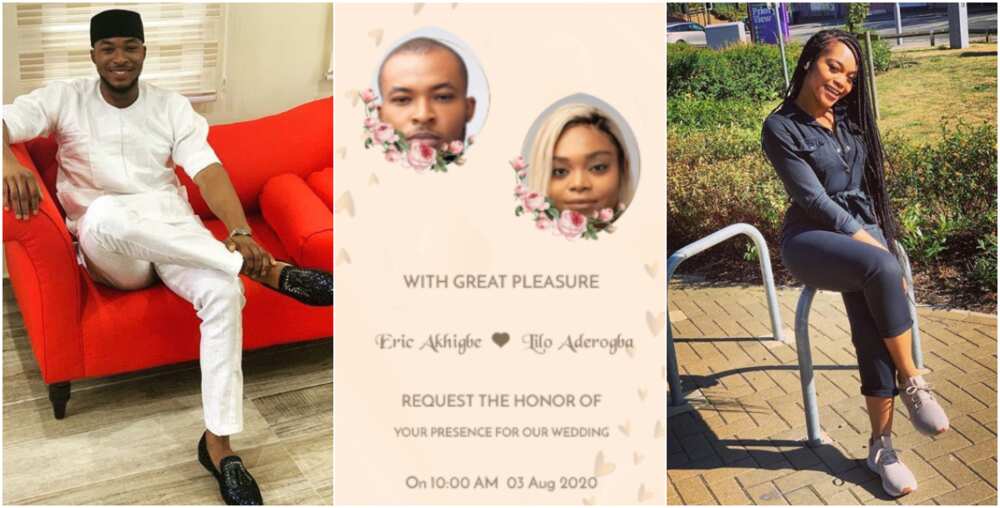 Meanwhile, as days go by, housemates who like each other have been expressing their feelings while some have started dating already and there are some others who are just taking their time.

Recently, Legit.ng reported that Rebecca Hampson, popularly known as Nengi had a conversation with another housemate called Prince. The beautiful fair lady opened up on her true feelings for the royalty.

As they conversed, Prince stated that Nengi likes him but she argued otherwise. According to her, she used to like him but not anymore. Prince, who wouldn’t take no for an answer, insisted that the lovely woman still likes him. But Nengi shattered his heart when she said that she’s just using him to pass time.

Prince wasn’t expecting the statement as he stared at her in shock. As he tried to leave Nengi and move away from where they were having the conversation, she called him back, saying that she was joking. However, she repeated the statement again.

Enjoy the fantastic song by Mr. P – Too Late

In another report, one of the most popular housemates, Dorathy, recently broke down in tears during one of her diary sessions as she shared some personal details about her life.

She spoke on how God continued to show up for her even when things were really hard. Dora also said that she plays a lot and tries to be happy so as to forget all the things she actually has to cope with.

During the diary session, Dorathy also revealed that her family already told her not to return to the house for going on the BBNaija show. She, however, sounded positive and said that God would not shame her.